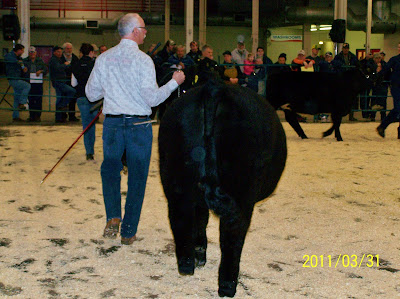 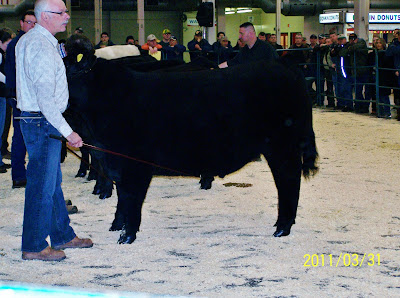 Pictured above is Glenn Jay with the Grand Champion Steer at the PEI Easter Beef Show & Sale in Charlottetown, Prince Edward Island, Canada. He was also the Champion AOB steer. The steer is Monopoly sired and is out of a purebred Angus cow. The cow, JEM Bride 46M, was also the dam of the 2010 Grand Champion at the Border Classic in Nappan, Nova Scotia. 46M is bred back to Monopoly for a December, 2011 calf.

This calf was purchased by Glenn Jay at the Duncan Livestock Prospect Steer and Heifer Sale in October, 2010. Jay receives a $150 credit for being a breed champion as well as a $250 credit for being named the Grand Champion for our 2011 sale on October 1st.

The judges for the show were Brad and Sarah Buchanan Gold Bar Livestock of Ariss, Ontario.

Monopoly semen is available in Canada from your local Genex representatives or call the office in Guelph at 1-888-354-4622.

Posted by Duncan Livestock at 6:14 PM